As a marine biology major at Humboldt State University, I was searching for an internship that would reinforce my conservation biology interests. Luckily, I had the opportunity to participate in the JISAO Summer REU at the University of Washington. Under the guidance of Dr. Dave Beauchamp at the School of Aquatic and Fishery Science, I conducted research on the largest and most valued salmon of the Pacific Northwest, Chinook salmon.

The Chinook salmon population in Puget Sound has declined over the past 30 years and is currently listed under the Endangered Species Act. Many questions remain about the sources of marine mortality for this salmon population. Recent research showed a strong relationship between the body mass of juvenile Chinook salmon during offshore residence in July and their overall ocean survival; however, the relative importance of nearshore and offshore rearing for juvenile Chinook salmon from specific watersheds is unknown.

Our research investigated critical periods and sizes that influence the overall marine survival of Chinook salmon. In order to determine if, when, and where size-selective mortality is occurring, scale growth histories of juvenile Chinook salmon in different habitats were compared. Monthly scale,  fork length, weight and diet sampling, was conducted during the spring and summer 2014 in southern Puget Sound across different life stages and associated habitats:  hatchery release, estuarine delta, marine nearshore and offshore. Our salmonid scale analysis identified strong-size selective mortality during the nearshore to offshore transition. Factors identified that affect growth and survival of juvenile Chinook salmon in different habitats will aid restoration efforts for Puget Sound Chinook salmon populations.

Overall my experience as a JISAO and SAFS intern was great. I had the opportunity to live in beautiful Seattle for two months, meet scientists, graduate students and staff that conduct impressive research, and learn about fishery science, which I previously had known very little about. Participating in this program allowed me to develop my academic and professional skills by exposing me to various fields in aquatic sciences. I would like to thank JISAO and the students and staff in Dave Beauchamp’s lab for mentoring me throughout this journey. 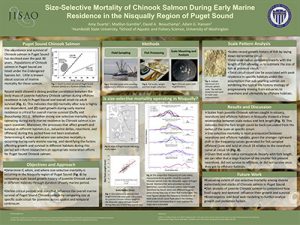