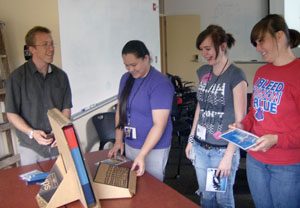 On June 29 and July 20, groups of students from the UW’s GEAR UP program visited JISAO for an afternoon Learning Lab focused on NOAA’s principles of ocean and climate literacy.

To begin, JISAO’s Todd Mitchell lead the group in an icebreaker exercise and gave a brief introduction of each of the researchers the students would be working with. He also gave an overview of ocean literacy, explaining how the ocean has a major influence over weather and climate.

The students were then divided into four groups of five or six students and sent to one of four stations set up around JISAO’s offices in John M. Wallace Hall.

In the first station, students met Karin Bumbaco, assistant state climatologist, who demonstrated the difference between climate and weather. Karin developed an exercise that uses beans to show rain measurements from Seattle and New York City. The results, surprisingly, showed that New York gets more annual rainfall than Seattle.

From there the students joined Guillaume Mauger, a postdoc researcher with JISAO. Guillaume talked about climate change forecasts for Washington State and had a hands-on activity to show how scientists use data to create climate models.

The third station was led by Jessica Kleiss (on June 29), a JISAO postdoc, and Laura Hinkelman (on July 20), a JISAO researcher. Jessica and Laura taught the students about the complex interactions that are regulating our climate. They used a cloud-in-a-bottle experiment to demonstrate the role of atmospheric aerosol in the creation of clouds. 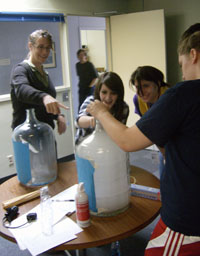 Finally, the students gathered as a large group again for a 15-minute round of trivia covering the topics they had just learned about. The winners chose between a dazzling variety of Seattle-themed magnets and breath mints.

The GEAR UP program (Gaining Early Awareness and Readiness for Undergraduate Programs) enables communities to create education partnerships to provide improved education opportunities for low-income students. GEAR UP Summer Institutes encourage students to succeed in high school and support them in preparing for college. The UW Summer Institute provides a unique four-day opportunity to experience life on a college campus.

JISAO has been partnering with the UW GEAR UP program since summer 2006.