Research
The Cooperative Institute for Climate, Ocean, and Ecosystem Studies

From the TASK II Nutrients Project:
CICOES Nutrients Program contributes to the Global Ocean Ship-Based Hydrographic Investigations Program (GO-SHIP), a systematic and global re-occupation of select hydrographic sections to quantify changes in storage and transport of heat, fresh water, carbon dioxide (CO2), chlorofluorocarbon (CFC) tracers, nutrients, and related parameters. It builds upon World Ocean Circulation Experiment (WOCE)/Joint Global Ocean Flux Study (JGOFS) surveys during the 1990s and CLIVAR/CO2 surveys during the 2000s. GO-SHIP reveals much about internal ocean pathways for heat, carbon, and other constituents and their variability, which impacts carbon and heat sinks on decadal time scales. It is designed to document and assess changes in the ocean’s biogeochemical cycles and transport of heat and freshwater in response to natural and/or man-induced activities. Below the 2000-m depth of core Argo floats, GO-SHIP provides the bulk of global-scale ocean measurements. The program also provides float deployment opportunities and data for Argo sensor calibration, both physical and biogeochemical (Argo, SOCCOM), and support for continuing model development that will lead to improved forecasting skill for oceans and global climate.

From the TASK II Tsunami Research Project:
The new on-the-fly capability in the Short-term Inundation Forecasting for Tsunamis (SIFT) system will have profound influence on the next-generation tsunami forecast system. This capability has filled the gap that small earthquakes/tsunamis could not be addressed well in SIFT, and will allow more rapid tsunami forecast, especially in the near field. The adoption of GNSS source estimation that is under development along with the on-the-fly capability will give an additional boost of the forecast speed of SIFT system. A variety of tools (ComMIT, TsuCAT, and TWeb) in the form of software and web product is, and will keep, having significant impacts on how future tsunami hazard assessment and mitigation can be done at the coastal community level.

A harmful algal bloom (HAB) of unprecedented geographic scope, duration, and intensity occurred along the West Coast of North America in the summer of 2015. Ryan McCabe of JISAO was the lead author of a journal article on this event (McCabe et al., Geophysical Research Letters, 2016) that has gained a great deal of attention from the scientific community, fisheries managers, and health agencies. He and his co-authors showed how warm and nutrient-poor conditions provided a competitive advantage to a particular species that can produce the toxin, Pseudo-nitzchia australis. A sort of one-two punch in the winds resulted in a massive bloom followed by the transport of toxic cells onto the coast, including shellfish beds. While this HAB cannot be attributed to climate change, it does illustrate one of the emerging threats of global warming.

The fifth of in a series of West Coast ocean acidification (OA) research cruises was conducted in 2016 from the R/V Ronald H. Brown. The Ocean Climate Stations Project (OCS) collects climate quality air-sea interaction observations that can be used as reference time series for assessment studies and process studies. JISAO scientists comprised a major portion of a large team with diverse expertise and interests. There were 16 lines of stations from Vancouver Island south to Baja California at which water properties were measured and phytoplankton and zooplankton were collected with nets. The chemistry of the ocean is changing, and there is simply no substitute for this kind of effort to document exactly how it is changing and impacting the base of the marine food web.

Hydrothermal vents might be expected to be inhospitable places. In actuality, complex biological communities have evolved to take advantage of the chemical energy in the plumes of water emanating from these volcanic springs. David Butterfield of JISAO organized and served as chief scientist on an innovative research expedition to explore new hydrothermal vent fields in the Mariana Back-Arc in the western Pacific Ocean. The ship was the Falkor of the Schmidt Ocean Institute, and video and samples were captured from a series of dives with SuBastian, a new and highly capable remotely-operated vehicle (ROV). The cruise included extensive public outreach highlighted by the streaming of dramatic live video from SuBastian.

A so-called “megaquake” on the Cascadia Subduction Zone offshore of the Pacific Northwest is inevitable. When it happens, a large tsunami will shortly thereafter deliver walls of water to places such as the Long Beach Peninsula of Washington State. Since there would be insufficient time to get from some low-lying areas to high enough ground, an alternative strategy is to construct some buildings such as schools and hospitals that would serve as refuges from a tsunami. JISAO scientists with the NOAA Center for Tsunami Research (NCTR) partnered with a committee of the American Society of Civil Engineers (ASCE) to address this problem. A large number of high-resolution simulations of tsunamis that could occur along the Pacific Coast were carried out by NCTR; the results showed that surges ranging from 16 to as much as 100 feet high are possible at particular locations. The modeled wave heights and current velocities were used by the ASCE to develop design standards for structures that could withstand tsunamis of these magnitudes.

Back to Top
Research 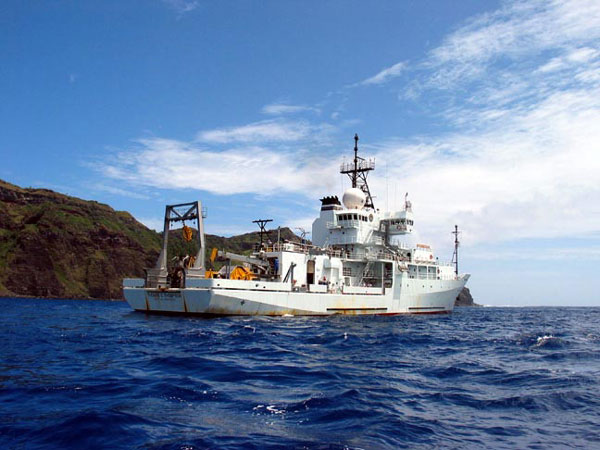