My name is Alexis Hollander and I am going into my senior year majoring in Biology and minoring in chemistry and German at the University of Wisconsin-Stevens Point. This summer I was given the incredible opportunity to do a research internship with the Joint Institute for the Study of the Atmosphere and Ocean. I worked with Dr. Alison Deary from the Ecosystems & Fisheries-Oceanography Coordinated Investigations Laboratory (Eco-FOCI) at NOAA’s Alaska Fishery Science Center. My project involved looking at two closely-related species of Sand Lance (Ammodytes spp.) to begin to describe how the species differ.

Sand Lance are an important group of fish because they are a major food source for many animals, including marine mammals, seabirds, and larger fish like Cod and Pollock, economically important fish for the North West. The Arctic Sand Lance (A. hexapterus) and the Pacific Sand Lance (A. personatus) were recently determined to be two different species through DNA analysis on the adult specimens, but as of yet we are unable to tell them apart visually. This is a problem in the parts of their ranges that overlap, including the Bering Sea, because we are unable to identify them in the field. Since these fish are such an important part of the food web, it is useful to know where each species occurs, so we can study if their distributions change with changing climate conditions and what effects these changes may have on the rest of the ecosystem. 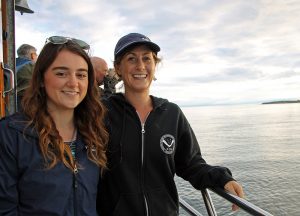 The ichthyoplankton lab studies larval fish, and my project began by finding the best specimens of each species to set up developmental series. I spent hours at the microscope, measuring Ammodytes spp. larvae to find specimens of different lengths, from very tiny young ones to larger juveniles. The developmental series I set up will allow us to study aspects of the two species’ development, such as when they undergo flexion, calcification and formation of bones (through clearing and staining specimens), what their body proportions are, and what pigment patterns they exhibit. I looked at these aspects during my summer here. The skills and techniques I’ve learned will help me in my future biology career.

The most useful characteristic that I found was pigment. A. hexapterus specimens had a large amount of pigment on their dorsal side, while A. personatus specimens did not. In larger specimens (>25mm), A. hexapterus specimens had pigment from their head to their caudal region, while A. personatus specimens had pigment only from anus to caudal region. This characteristic is useful because it is something that is relatively quick and easy to notice with the naked eye in the field. In contrast, body morphometrics were less useful, despite also showing a difference between the species. Using a computer imaging program, I took eight different body measurements of all the 84 specimens I found. These data were analyzed in R, using statistical tests including principle component analysis (PCA) and linear discriminant analysis (LDA). Both tests indicated that there were significant differences in body measurements between the species. However, human eyes are not able to identify these differences when looking at a fish, so to use this method for identification, all eight measurements would need to be accurately taken and analyzed with the model before the fish would be identified. The next step in this project is to use the results I have found to begin to separate the specimens that were collected in the Bering Sea, where the two species are found together. These specimens would undergo DNA analysis to determine if my findings hold true across the entire range of both species.

Outside of my research, I was able to meet and connect with a great group of people who have become some of my best friends. With the 2018 interns, I have has so many opportunities to explore the Seattle area, and I did a lot of things that I never thought I’d have the chance to do, like hike up a mountain. Visiting Mount Rainier National Park with JISAO was a highlight of my summer, and seeing some beautiful seabirds was unforgettable! I am so thankful to have gone through this program. It has always been my plan to attend graduate school, but my experiences this summer have helped me feel a great deal more prepared to begin that process. Thank you to my fellow interns for all of the memories we have shared. Thank you to the Eco-FOCI lab members, for giving me help and advice on my project and on my future education and career. A huge thank you to Dr. Deary for giving me so much guidance and support with my project and my future. I could not have done nearly as well without you. Finally, thank you to Jed, Tom, and the rest of JISAO for making this internship a truly amazing experience. 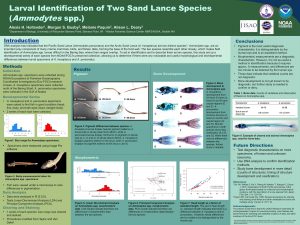