I am Alissa Luk and I am a biology major studying at New York University. I was very excited and grateful when I was given the opportunity to intern at JISAO for the summer. I worked with Casey Saenger on a project looking at the oxygen isotope composition of a sclerosponge skeleton. The skeleton is made up of a type of calcium carbonate (Ca2CO3) called aragonite and as the sponge grows in the ocean, carbonate ions (CO32-) containing different oxygen isotope (O-18 and O-16) are incorporated into the skeleton. The varying levels of oxygen isotopes are indicative of the temperature and seawater of which the sponge grew in and so paleoclimatologists measure the ratio between the oxygen isotopes, given as a δ18O value, in order to possibly reconstruct the historical oceanic climate.

In order to reconstruct a history, I spent the summer using a micro-mill to collect samples of the sponge at varying depths and analyzed them in an automatic kiel device and mass spectrometer. With the δ18O value of all the samples, we used the data to figure out how well the sponge recreated past sea surface temperatures and what the climate was like prior to recorded temperatures. With a growth rate of about 0.25 mm/year, it almost looked like our sponge was recording the exact opposite temperatures than what the instrumental data had recorded and would seem that the sponge was simply not a great proxy.

But science is never that simple. We noticed that the δ18O values had recorded some sort of multidecadal oscillation that seemed related to the Atlantic Multidecadal Oscillation (AMO), which is a northern region of the Atlantic Ocean at which the average sea surface temperatures oscillate between cold and warm trends every 20-40 years. The oscillations were recorded in the sponge and we were able to find a significant correlation between the sponge and the AMO recorded in instrumental data. By using models and R programming software, we were able to answer questions about the AMO such as how long has it been around and whether external forcings caused the oscillations. And with the information I found, I was able to create my very first research poster.

During the nine weeks, I gained valuable skills in using the micro-mill and the kiel device and mass spectrometer. I also broadened my computer science skills by learning how to use NOAA’s data visualization and analysis program called Ferret and learning how to use R programming to calculate and visualize the data. I discovered that there are always uncertainties when reconstructing the past climate but the research is very important especially to predict the global climate and how global warming will affect the world we live in. I am grateful to JISAO and Casey for giving me an opportunity to look outside of the biology field and to experience a different type of science that I may never had known if not for this internship. 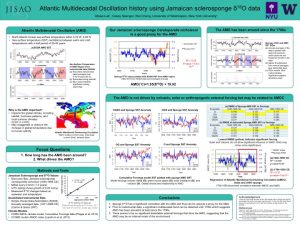