My name is Anita Montero and I am a rising junior studying environmental biology at Barnard College of Columbia University. This summer I was given the opportunity to work as a JISAO intern with the Keister Lab Group at the University of Washington Department of Oceanography. I worked primarily with Anna McLaskey, one of Julie Keister’s Ph.D. students, on her graduate thesis.

Anna’s work focuses on the response of Euphausia pacifica, the pacific krill, to ocean acidification conditions in Puget Sound. E. pacifica are an abundant and trophically important krill species in the California Current and North Pacific ecosystems. The spatial variability of environmental conditions in the sound makes the area a robust natural laboratory for studying the effects of environmental change. To examine physiological response to pH exposure, Anna intends to use enzyme activity analysis as a proxy for more traditional methods of respiration and growth rate measurement. She hopes to uncover sublethal impacts that are not visible through abundance estimates alone. 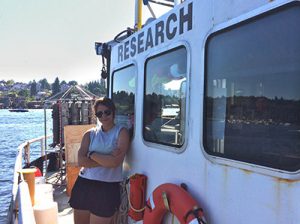 The majority of data collection occurred in June, at the beginning of my internship, onboard the research vessel Clifford A. Barnes. Over the course of nine days, we visited seven research stations in Puget Sound, going from Hood Canal, where acidification is most extreme, to South Sound, where greater mixing occurs. At each station, we used Conductivity, Depth, Temperature (CTD) casts to monitor the water chemistry and took discrete water samples for analysis in the lab. We also did depth-stratified-net sampling to collect zooplankton samples. At stations P15, P8, and P28 we performed on board respiration experiments that monitored oxygen drawdown of individual krill. At stations P12 and P38 we performed a growth rate experiment that tracked the frequency of krill molting within a 48 hour period.

Once back at the lab, I worked primarily on consolidating and analyzing the respiration data collected on the cruise. I calculated the rate of oxygen drawdown per hour for each individual krill using a linear regression, standardized to dry weight. Eventually, Anna will use this data to calibrate the respiration enzyme activity data. Using a post-hoc Tukey Test, I found non-significant differences between krill respiration in different areas of the sound. I observed lower respiration at station P15, where individuals were exposed to low pH and low temperatures, and higher respiration at P8 and P28, where pH and temperature were higher. At P28, where respiration was highest, individuals were additionally exposed to a wider range of temperatures during their diel migration. These results are consistent with the available scientific literature on E. pacifica respiration and environmental exposure.

Thank you to JISAO and the Keister Lab Group for this wonderful opportunity! 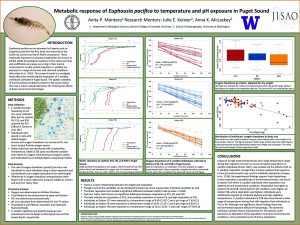