Mercury (Hg) is naturally occurring in young rocks and volcanic regions, with cinnabar being the most abundant Hg ore. Hg is present in the atmosphere as a result of geologic activity in the form of elemental Hg0 and from anthropogenic activity which releases both Hg0 and HgII. Hg0 is initially oxidized by Br and Cl to HgI, but it is rapidly reduced back to Hg0 or further oxidized to HgII by Br, Cl, ClO, BrO, HO2, and NO2, with NO2 being the dominant oxidant. HgII is short lived in the atmosphere and is more reactive than Hg0, thus it contributes more directly to deposition.

When deposited to terrestrial and marine ecosystems HgII has the potential to turn into toxic methylmercury (MeHg) attributed to bacteria. MeHg bioaccumulates up the food chain to fish that wildlife and humans eat. Long term exposure to mercury results in adverse health effects including behavioral, neurochemical, hormonal, and reproductive problems.

In the 1950s people of Minamata, Japan were exposed to high levels of methylmercury that had accumulated in the fish they depended on for food because wastewater from a chemical plant was disposed of in the Agano River. This resulted in mercury poisoning and a large scale public health epidemic. Because elemental Hg0 is transported long distances and fish are traded globally, an international treaty was necessary.  In 2013 the Minamata Convention on Mercury was established, named after the victims of Minamata, Japan. The treaty is designed to protect human health and the environment by working to reduce anthropogenic emissions of mercury.

Since the 1990s there has been a flat or increasing trend in the total global Hg emissions to the atmosphere. In the United States and Europe Hg emissions have decreased while in China and East Asia, they have increased. Additionally, NOx emissions have decreased due to strict emission controls and technology improvements. Decreases in NO2 could have potential to affect the deposition rates of mercury due to potential changes in the oxidation of HgII. The aim of my JISAO project was to use GEOS-Chem to analyze how changes in NO2 concentrations affects the oxidation of mercury, as well as the trends in Hg concentrations and deposition. 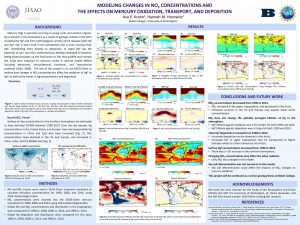