My name is Bria Goldade. I am a senior at North Dakota State University and I am studying geology. I worked remotely with Dr. Yolande Serra and Dr. Ana María Durán-Quesada this summer. They were a part of a field campaign called OTREC (Organization of tropical east pacific convection) that took place from August 5th – October 9th, 2019. The goal of OTREC was to characterize convection over Costa Rica. My project stemmed off of this goal and I looked into how easterly waves modulate meteorological variables and the isotopic composition of rainfall. Easterly waves move from east to west and they disturb the tropical easterly winds. These waves contribute to seasonal rainfall and are often precursors of tropical cyclones. These are some of the reasons we decided to study them more in depth.

Meteorological and isotope data was collected from sites spanning the geographically diverse terrain of Costa Rica. I focused primarily on isotope data, temperature data, and relative humidity data. I looked into isotopic data first and used the relationship between oxygen 18 and deuterium to determine whether rain from each location was sourced from the ocean (enriched isotope values) or land (depleted isotope values). Sites located near the ocean were enriched and values depleted as sites moved inland.

Outgoing longwave radiation data was used to categorize easterly waves into three phases: ridge (fair weather), neutral (fair weather or isolated convection), and trough (widespread convection). Oxygen 18 isotope data from the Caribbean Coast and the Central Mountains showed modulation by easterly waves. Note that increased convective activity depletes oxygen 18. The ridge phase represented values congruent with the source of rain (land or ocean). The neutral phase showed little depletion at the Caribbean Coast and notable depletion in the Central Mountains. This is likely due to the topographically forced afternoon thunderstorms in the Central Mountains. The trough phase showed depletion compared to the ridge phase at the Caribbean Coast and a signature comparable to the trough phase in the Central Mountains as both phases experienced increased convective activity. In regards to meteorological data, troughs resulted in increased relative humidity and decreased temperature. Future work will look into modulation of convection across the surface network by the waves seen in this study.

I was a bit apprehensive to jump into an online internship as I knew researching a topic I had little background in as well as learning the research process remotely would be difficult. JISAO handled this situation so well. Communication between my mentors, fellow interns, and the JISAO staff was seamless. The skills I gained from completing an online internship have definitely better prepared me for future research and career endeavours. The amount of support I received from not only my mentors, but also the rest of the JISAO staff was incredible.

I am so happy I was able to be a part of this research experience. 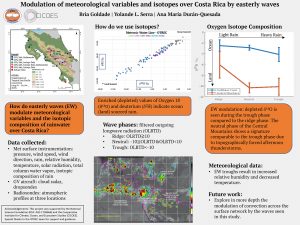