My name is Brittany Hernandez and I am a senior at Bowdoin College. My major is Earth and Oceanographic Science. This summer I was an intern for JISAO and had the opportunity to work at the NOAA Marine Mammal Laboratory with my mentor, Manuel Castellote.

Through the JISAO internship I was able to be exposed to and learn more about acoustics. My project focused on identifying calls from beluga whales (Delphinapterus leucas). By describing individual differences in how belugas vocalize, researchers may be able to identify individuals acoustically, and better understand movement patterns. In 2016 four beluga whales from a pod in Bristol Bay, Alaska were tagged using DTAGs. DTAGs allow scientists to acoustically monitor marine mammals. Bristol Bay belugas are a proxy for the endangered Cook Inlet belugas due to the invasive procedure of attaching the DTAGs, which could further impact their declining population. I processed the DTAG files using Raven, an acoustic analysis program, which allowed me to analyze spectrograms to visually identify calls. In addition to visual identification, waveforms allowed me to listen to the identified calls. Once identified, I would match to the call to previously classified beluga calls. The results allowed for the development of a Bristol Bay beluga vocalization repertoire.

Thank you to JISAO and Manuel Castellote for providing me with the opportunity to work at NOAA Marine Mammal Laboratory and be exposed to marine mammal acoustics. And thank you to the other interns for a wonderful summer of exploring Seattle! 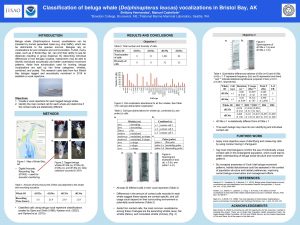