During my time as a JISAO summer intern I worked with Dr. Erin Richmond and Dr. Erin Moreland, members of the Marine Mammal Laboratory at NOAA’s Alaska Fishery Science Center, to analyze aerial survey images of sea ice for presence of seals and polar bears. The images were captured as a part of the Chukchi and East Siberian Surveys (ChESS), a collaborative effort between U.S. and Russian research groups seeking to quantify the abundance and distribution of Arctic marine mammals. The current survey technique utilizes a paired camera system of thermal and color cameras mounted in the belly port of a fixed-wing aircraft. Pairs of images are captured and screened using a thermal image review program to detect hotspots that represent animals.

The goal of my project was to measure the detection rates of the different thermal cameras used during survey flights. To calculate these rates, we compared my detection results of the color images to the results of the thermal image review software. Knowing the detection rates of the thermal cameras is important because it can be used to help researchers more accurately estimate abundances and distributions of Arctic marine mammals.

With the climate changing at a rapid pace and sea ice loss becoming more prevalent, accurately estimating the populations and distribution of Arctic marine mammals is critical. Having an opportunity to be a part of these efforts was incredibly rewarding.

In addition to learning more about Arctic surveying techniques, I had access to an incredible team of people that I could talk to about my project, career advice, or just research in general. I had never been exposed to government research before and getting a hands-on experience through this internship gave me valuable insight into possible career paths. There is a huge array of occupations within marine science and learning more about them this summer only inspired me further. 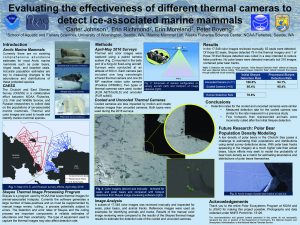