During the 10-week summer JISAO internship I worked with Dr. Jens Nielsen and Dr. Lisa Eisner on our Project entitled, “Factors that Influence Phytoplankton Biomass and Productivity in the Chukchi Sea in 2017”. Phytoplankton are an important area of study because they are the base of the marine food web. These microscopic marine algae are autotrophs that depend on light, nutrients, and temperature to assimilate carbon and produce oxygen. Changes in temperature and salinity create stratification that limits vertical mixing of deeper water to surface water, often resulting in nutrient depleted surface waters and nutrient rich deeper waters. In these waters, it is possible for phytoplankton blooms to occur. We characterized phytoplankton blooms as having a peak in chlorophyll-a concentration of at least 1 microgram per liter above the median for the cast. We then split the phytoplankton blooms into two categories: surface blooms which occurred in the upper 15 meters of the water column and subsurface blooms that happened below 15 meters. We were particularly interested in subsurface blooms because this is more commonly an effect of stratified waters. We assessed the prevalence of phytoplankton blooms in spring (June) and late summer (August-September) in the Northern Bering and Chukchi Sea in 2017. We then identified the main drivers of surface and subsurface blooms. Finally, we used theoretical models using temperature, irradiance, and nutrient availability to predict realized growth.

We concluded that there were more subsurface blooms in fall than spring. Also, most casts appeared to be primarily limited by nutrient availability in surface water. For these casts, phytoplankton growth depends on nutrient availability and will experience tradeoffs of light and temperature to acquire nutrients. For non-nutrient limited casts, phytoplankton growth was best described as light dependent. Better understanding the relationship between phytoplankton growth and nutrient dynamics in the Northern Bering and Chukchi Seas will improve our understanding of how future climate warming might impact these ecosystems. 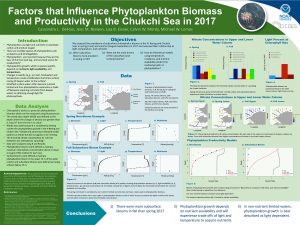