My name is Claire Buysse, and I am a junior chemistry major from the College of Saint Benedict and Saint John’s University in central Minnesota.  This summer, I worked with Dr. Becky Alexander in the UW Atmospheric Sciences Department to investigate the disagreement between sulfate aerosols in the Greenland ice-core record and global models.

Sulfate aerosols have important light-scattering properties and a net cooling effect that is thought to be responsible for suppressing the onset of warmer temperatures in the Arctic.  Sulfur dioxide, an air pollutant often released during the combustion of fossil fuels, is a precursor gas to sulfate aerosols.  The anthropogenic emission of sulfur dioxide has significantly declined in recent decades due to the enactment of legislation like the 1970 and 1990 U.S. Clean Air Act and Amendments.  This decline is evident in the measurement of sulfate concentrations in an ice-core taken from Summit, Greenland in 2007.  However, beginning around 1990, there is a dramatic reduction in sulfate concentrations that cannot be attributed to changes in source emissions alone.  Global models that simulate this time period tend to underestimate this decrease in sulfate concentrations, which may lead to underestimates of the role sulfate aerosols have played in the recent Arctic climate.

I utilized GEOS-Chem, a global 3-D chemical transport model, to simulate the transport of sulfate aerosols to Summit, Greenland from 1979 to 2005.  In attempting to explain the difference between the ice-core record and other global models, I manipulated three model variables: meteorology, chemistry, and source emissions.  We hypothesized that the negative trend in the North Atlantic Oscillation (NAO) over the past few decades may have decreased the transport of sulfate to Summit, Greenland and affecting its accurate representation of the Arctic as a whole.  To test this, we used a constant meteorology over the time period set to 1980, a year with a relatively neutral winter NAO index.  We also tested the effect of adding metal-catalyzed sulfate production mechanisms to the model, which would have most significantly impacted mid- to high-northern latitudes in the 80s and 90s, when anthropogenic metal emissions were relatively high.  Thirdly, we added regional  emissions inventories to the model simulations, and which override the global inventory in specified locations.  To verify the accuracy of sulfate aerosol transport from anthropogenic sources, we also performed simulations without the global anthropogenic inventory, including only natural emissions.

In comparing our results from each set of simulations, we found that modifying the source emissions had the greatest effect on the predicted sulfate concentrations at Summit, Greenland.  The model was not as sensitive to modifications in meteorology and chemistry. Further, adding the regional inventories most accurately reproduced the dramatic decrease we see in the ice-core record after 1990.  In the future, we hope to calculate the radiative forcing in the Arctic from the regional simulations and compare it to previously reported values.  This comparison will allow us to investigate the potential for underestimates of the role sulfate aerosols have played in recent Arctic climate.

My internship experience here at JISAO has been phenomenal and I am so thankful to have had this opportunity.  Working in the Alexander group was fantastic and it was great to work with such a welcoming community in the Atmospheric Sciences Department and at JISAO. I have been able to discover so much about myself and my future plans this summer that just wouldn’t have been possible for me to do back home in Minnesota.  I cannot so how lucky I am to have interacted with so many incredible people through this program, and this summer in Seattle is not one I am soon to forget. 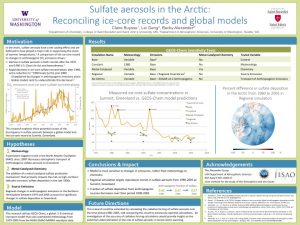