My name is Dakota Hunt and I am a rising senior at Carleton College where I am a chemistry major and biochemistry minor. This summer I worked as a part of the NOAA Pacific Marine Environmental Laboratory Genetics and Genomics Group (G3) under the mentorship of Carol Stepien and Kim Andrews.

G3 focuses on understanding invertebrate and fish community species compositions, abundances, and diversity by using metagenomics high throughput sequencing assays. Plankton, environmental DNA (eDNA) and fish samples are collected and metabarcoding is used to identify and quantify species present. I was mainly concerned with eDNA, a burgeoning field that is growing rapidly along with advancements in sequencing technologies. Environmental DNA samples contain a complex assortment of DNA from various organisms present in environmental samples such as seawater. The eDNA is from mucus, shed cells, and waste products. Working with eDNA is typically more problematic compared to working with DNA extracted from a tissue sample of a known organism, because eDNA samples typically contain diluted and degraded DNA. Furthermore, the presence of enzyme inhibitors can make studying eDNA samples a more challenging task. Several studies have compared the performance of different preservation and extraction protocols for freshwater eDNA samples, but comparable studies for marine eDNA samples are lacking.

My main project consisted of identifying the best combination of preservative and extraction method for seawater eDNA samples. The goal was to find the combination of methods for which DNA amplification via the polymerase chain reaction (PCR) worked most frequently. We collected 42 liters of seawater from Shilshole Bay Marina and filtered them through 0.45 micron filters back at the lab, along with 8 liters each of field and lab negative controls. Half of the filters were preserved in 95% ethanol and half in Longmire’s Buffer. After 3 days we conducted our initial DNA extraction for 24 of the samples, half using the chloroform:isoamyl alcohol method, and half via the phenol:chloroform:isoamyl alcohol method.

What followed entailed setting up a series of PCR runs to try and amplify specific target sequences (mainly the Copepod 16s marker) of DNA that act as a barcode of sorts and allow us to identify taxa present in the sample. I used gel electrophoresis to check if the samples successfully amplified during PCR. After our initial runs we suspected that PCR inhibitors present in the samples might be stopping them from amplifying successfully. We tested two methods of removing these inhibitors: a sodium acetate cleanup and the use of Zymo Research OneStep PCR Inhibitor Removal kits. We also used two types of DNA polymerase in our PCR runs, Promega taq polymerase and Qiagen AllTaq. We extracted 6 samples (3 ethanol and 3 Longmire’s) using the chloroform method after 16 and 35 days, based on the fact that this extraction method appeared to work best for the initial extraction. This was done to create a time series and test the effects of preservation period. Ultimately we found that the ethanol chloroform method was the most consistent of the four treatments, and that using the Zymo kit cleanup and AllTaq resulted in the most samples amplifying successfully overall. Based on our time series, ethanol appears to work better as a preservative than Longmire’s buffer.

I was also fortunate enough to partake in a week long Washington Ocean Acidification Center cruise around the Puget Sound, collecting plankton samples as well as chlorophyll, nutrient, salinity, dissolved oxygen, and several other types of measurements. I would like to thank everyone at JISAO, the other interns, and all members of G3 that made my summer an enjoyable and rewarding experience, and for providing me with such wonderful opportunities. 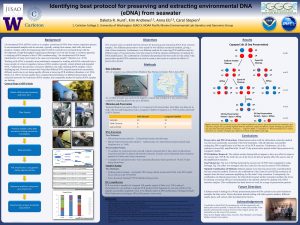