My internship took place during the global pandemic of COVID-19. I had the unique opportunity to be a part of a remote research project, the first of its kind in JISAO/CICOES history. Remote research is not easy, but through the guidance and ingenuity of my advisors, I was able to conduct independent research that by the end of nine weeks, culminated into clear results that I presented as a virtual poster in a novel format, an online poster hall and presentation symposium. This summer I studied the effects of low oxygen levels, hypoxia, on the behaviour of a species of zooplankton: Calanus pacificus, a marine copepod. I was advised by Julie Keister and Danny Grunbaum; UW graduate student Amy Wyeth and zooplankton ecologist Deana Crouser were also integral to my success this summer.

Hypoxia is classified as <2 mg O2 L-1 is known to have extensive physiological effects on zooplankton. One taxa of zooplankton in particular: Copepods are an important food source for many fish in the Pacific Northwest. Calanus pacificus, a species of copepod found abundantly in Puget Sound, exhibit a behaviour known as diel vertical migration – meaning they move up the water column at night to feed on phytoplankton, and then swim down to the bottom to hide from predators during the day. Copepods were collected from the seasonally hypoxic Hood Canal ecosystem and from the normoxic South Sound habitat. My project focused on quantifying the behavioural responses of individual copepods to treatments of hypoxia relative to the behaviour of copepods in the control, or normoxic, tanks. This is how I would test the hypothesis that individual copepods would modify their behaviours to avoid the low oxygen conditions, resulting in a grouping of individuals in less stressful water.

The data I analyzed came from a series of experiments being done by Amy Wyeth at UW. Per each experiment, 2 of 4 1-m tanks were randomly selected to have the bottom portion either normoxic, the control, or hypoxic this was relative to the tops of tanks, which were all normoxic. 20 Calanus were then introduced to each of the tanks and filmed for 30 minutes to observe their behaviours in the experimental conditions. Then, after many hours of online video calls going through protocols step by step and individual practice sessions, I performed video analysis of Calanus’ swimming trajectories using the video analysis program FOSICA. I then used custom scripts and the Tracker3D algorithm in Matlab to perform analyses of copepod density and individual swimming paths in each tank.

Copepods in hypoxic tanks were all on average closer to the top of the tanks relative to the control tank copepods, meaning that hypoxia disrupted the vertical distribution of copepods in the water column of treatment tanks. These preliminary data also suggest that copepods from South Sound showed a lesser tendency to avoid the hypoxic conditions than those collected from a seasonally hypoxic environment.

To further the findings of this research it would be useful to do more replicates and to take advantage of another available data set. In 2017 and 2018 an in situ video camera, ‘Zoocam’, was deployed in Hood Canal to image zooplankton. The next steps would involve quantifying population-level copepod distributions in the field by analyzing images captured from the Zoocam using the Zooplankton Image Analysis program, then comparing these data with the results of the tank experiments and quantifying how closely the experimental results match what we see in the field. This may help us better predict what will happen to one of the most abundant organisms in one of the most important trophic levels in the marine food web in an ocean of ever decreasing oxygen. 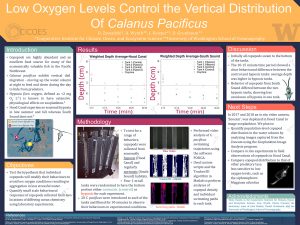