Having grown up in Seattle, the city itself wasn’t new to me, but everything else about my JISAO experience was, which meant that I learned a lot!  I spent nine weeks working with Dr. Julie Keister in the zooplankton lab, looking at the impact of the Blob on ichthyoplankton (fish larvae) abundance in Puget Sound.

The Blob is a warm water anomaly of 2-3 degrees Celsius that formed in the North Pacific in 2013 and then moved into Puget Sound between 2014 and 2015.  Just offshore of Seattle, water temperatures were 2 degrees warmer in February of 2015 than a year prior!  The samples that the ichthyoplankton came from were part of a larger effort called the Salish Sea Marine Survival Project, which is trying to figure out why salmon are dying in the Salish Sea (Puget Sound plus the Straight of Georgia).  My project was part of a bottom up study – some species of fish larvae, called forage fish- are an important part of salmon diets.  If the prey is impacted by temperature increases, the salmon will be too.

I spent the first half of the summer identifying fish that had been pulled out of samples during subsampling for zooplankton.  I’d never spent much time with a microscope outside of 9th grade biology, so I spent the first week getting oriented and attempting to develop my fish identification skills.  I would examine a fish under the microscope (most are less than 10 mm long), focusing on its pigmentation and shape, which differ a lot between families, and even species.  I would then try to match these up with the sketches in the Laboratory Guide to Early Life History Stages of Northeast Pacific Fishes.  Sometimes, species were really obvious – other times, I just had no clue.

Once I finished identifications, my mentor and I determined that there weren’t enough forage fish to draw any conclusions surrounding temperature impacts.  I then decided to look at samples from April/May/June of 2014 and 2015 at 2 particular locations.   I went through these entire samples under the scope, looking for any fish that may have been missed, and identifying everything to family.  This meant that I got to look at tiny crabs, jellyfish, and other larvae – all of which was totally new to me, and super cool.  By the end of the summer, my identification confidence had increased immensely, and the lab will continue to ID forage fish as they go through samples.  I never found any distinct impacts of temperature on overall abundance, but I did discover that species diversity was much higher in 2015.  It could be temperature that caused this, or some cascading effect on chemical/biological/physical properties caused by increased temperature.

A highlight for me was getting to know Seattle again through the other interns’ eyes – we went hiking, on the weekends, to baseball games and outdoor concerts after work, and made it to two national parks in one week!  Overall, I had a great time and met some wonderful people. 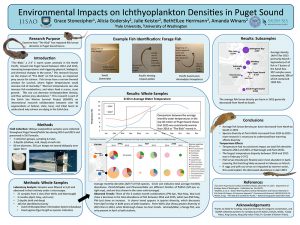