This summer, I had the privilege of conducting a summer internship with the Cooperative Institute for Climate, Ocean, and Ecosystem Studies hosted at the University of Washington. I was directly mentored by Dr. Thomas Ackerman and worked closely with other UW members of the International Partnership for Cirrus Studies (PIRE), including Dr. Christopher Bretherton, Dr. Peter Blossey, Samantha Turbeville, Jacqueline Nugent, and Rachel Atlas.

A current focus of the UW PIRE group is to understand how well the high-resolution weather models of the DYnamics of the Atmospheric general circulation Modeled On Non-hydrostatic Domains (DYAMOND) intercomparison project simulate clouds. One measure of the models’ accuracy is how closely their frequencies of cloud occurrences compare to observational data. I was tasked with processing radar and lidar data from the Department of Energy Atmospheric Radiation Measurement (ARM) program for this purpose. The data were recorded on Manus Island, Papua New Guinea between 1999 and 2013. Cloud profiles from several DYAMOND models were derived from a 1°-by-1° latitude-longitude area including Manus Island. The models were similar to observations in some regards, but different in others, and different from each other. This conclusion implies that increasing resolution of climate models may not solve current cloud representation issues.

Working from home in 2020 was certainly not ideal, but I still learned much during these nine weeks of work. Samantha and Jacqueline met with me once or twice a week to help me debug, Dr. Ackerman and I had weekly one-on-one Zoom sessions, and I joined the weekly PIRE group meetings – but outside of these calls, my workdays were mostly spent in solitude. Many of the questions I generated could have been instantly answered in person with a tap on the shoulder. Rather than constantly pester everyone with emails and texts, though, I found answers to most of my queries in the dozens of tabs I had open at any moment. I am proud of the amount I was able to teach myself this summer given the circumstances. I was also able to make many memories with the other CICOES interns despite the distance. We helped each other with computer problems, commiserated over deadlines, and got together for virtual game nights. All in all, I could not have asked for a better mentor, nicer coworkers, or a more dedicated CICOES team. 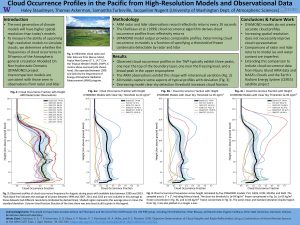