My name is Iker Madera, and I am a senior undergraduate student in geophysical engineering at the Colorado School of Mines. Studying geophysics has given me an insight into the different applications related to my major. I have since become interested in remote sensing methodology for the monitoring and modeling of crustal dynamics, so I was searching for a research opportunity that would allow me gain research experience related to my interests. I was fortunate and excited to be selected as one of the 2016 Joint Institute for the Study of the Atmosphere and Ocean (JISAO) Summer interns, and even more thrilled to learn that I would be working at the National Oceanic and Atmospheric Administration (NOAA)’s Pacific Hydrographic Branch.

NOAA’s hydrographic offices are tasked with upgrading raster charts to/or creating new electronic nautical charts. Nautical charts map depth and bottom characteristics of bodies of water, focusing on shallow features that could be hazardous for vessels navigating within U.S.  waters. Hydrographic surveys are conducted using multi-beam sonar which uses the principles of echolocation to send sound waves along the ocean floor and records the return soundings.

For my research project, I was under the advisement of Peter Holmberg, Grant Froelich, and Janice Eisenberg, where I would be testing the upgrade version of CARIS: HIPS 10.0_Beta, the computer software program used to process the hydrographic field data which then creates a 3D surface of the ocean floor.

Sonar datasets are a series of point clouds not evenly distributed across the surveyed area, so a spatial grid is used to process the data points. They were two main features to test on the new version of HIPS. In the previous version, the user assigned a grid with evenly spaced tiles, and a single resolution value that applies to all the tiles. The new algorithm, divides the grid depending on the density of soundings and highest possible resolution value. The resulting grid will contain tiles of different sizes and resolution values (delineated by initial resolution boundaries defined by the user). The second feature tested calculates surface depth values based on density of points and certainty probability of each sounding. The algorithm obtains a depth value from the strongest soundings and groups them together into a node. Finally, a mesh will be modeled over each node point. By creating several surfaces at various parameters, and then running statistical analysis, I was able to assess that the program was able to assign various resolution values throughout the surface, while at the same time, meeting the minimum parameters stablished by the Office of Coast Survey.

This research opportunity allowed me to learn about the procedures behind a hydrographic survey. I also learned a great amount about statistical data analysis, and about the process to prepare a poster and project presentation.  I would like to thank the team at the Pacific Hydrographic branch for their support and hospitality, all the researchers, faculty, and staff at JISAO, and particularly to Tom Ackerman, and Jed Thompson for giving me the opportunity to be part of this unforgettable Summer research experience. 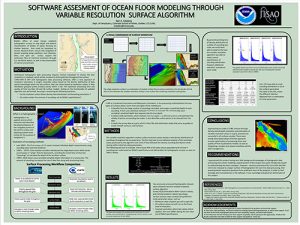