The goal of my study is to further our understanding of the trophic relationships of resident Chinook salmon in Puget Sound during the spring-summer growing period of May-July. For juvenile Chinook, fast growth in open water habitats of Puget Sound during June-July is strongly correlated with improved ocean survival. 30% of juvenile Chinook remain resident in Puget Sound rather than spend most of their marine life in open ocean. An earlier study estimated that predation by resident Chinook could impose 10-50% mortality on the incoming cohort of subyearling Chinook, but these estimates were highly sensitive to assumptions about temporal changes in the diet from May through July. Despite resident Chinook salmon representing a significant fraction of the overall population in Puget Sound, little is known about their life history or trophic relationships. Therefore, although we know they feed initially on zooplankton and then prey fishes, looking further into the timing, size relationships, and other details of their feeding and growth help us understand their role in the food web as prey, competitor and predator. Live resident Chinook salmon were sampled through microtrolling. Captured fish were then anesthetized and checked for marks indicating which hatchery they came from. Fork lengths and weights were measured, scale samples were removed, and stomach contents were flushed onto a sieve. Fish were given time to recover and then released. Diet samples were analyzed in the lab under a microscope. Prey fish were identified to species and invertebrates to their functional groups. We then measured and recorded blotted wet weight for each prey group to determine their proportional weight contribution to the diet. Diet analysis results indicated no evidence of Chinook or other salmon in the diet samples despite the majority of the salmon caught being capable of eating larger food like prey fish. Trends in data showed the majority of the Chinook diet consisted of herring in 2018 and crab larvae in 2019. Despite this change in diet, we found that their body condition remained constant between years. 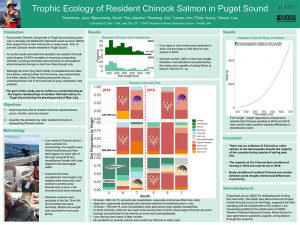