Iron is an important element crucial for life in the ocean, including heterotrophic bacteria. It is known to be a limiting factor in phytoplankton growth in the global ocean. Various studies have been conducted on how phytoplankton affect the cycling of iron in the ocean, but studies relating how bacteria affect the cycling of iron in the ocean are scarce. Bacteria replenish nutrients, such as nitrate and phosphate, in the ocean that are released by decomposing phytoplankton in a process known as decoupling. Decoupling has been known to be an abiotic factor, yet bacteria require iron for their respiration process.

Data obtained from GEOTRACES IDP from various cruises was analyzed through a homemade python code which plotted iron and nitrate concentrations throughout ocean depth. The two cruises selected traversed the Atlantic ocean, where iron was relatively high in the north and relatively low in the south, as well as the southern Pacific ocean containing the lowest concentration of iron. The code also determined which depth the biggest differences in concentrations occurred. These are known as the Nitracline for nitrate and ferricline for iron. These clines are an indication where each increasing nutrient is being replenished by bacteria. Once the nitracline and ferriclines were obtained from both cruises, the difference in values of clines were taken which signified the difference in de-coupling.

It was found that the largest difference between the depth of the nitracline and ferricline was in the GP16 (South pacific) dataset, followed by the South Atlantic leg of GA02, and finally the Northern Atlantic leg of GA02. These results held broadly as a whole throughout the data. The data seemed to follow a pattern of biggest difference in clines being associated with regions of lower iron concentration.

The data suggests that in regions of low iron concentrations, heterotrophic bacteria require a larger uptake of dissolved iron in the upper waters to respire the sinking organic matter released by decomposing phytoplankton. If this is the case, we would expect that iron would remain in low concentrations at depths where organic matter is being remineralized. Future work will compare results to bacterial abundances and incorporate this process to the biogeochemical model of iron cycling in the ocean. 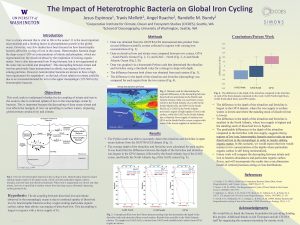