I am Karen Valladares, and I am a chemistry major at the University of California, Irvine. I was beyond excited when I found out I had been selected to be a JISAO research intern for the summer. I worked with Casey Saenger at the University of Washington in the Isotope Lab. I worked with tap water samples in the Pacific Northwest in order to gain a better understanding of 17O excess. The Pacific Northwest contains varying hydrological conditions, so we would be able to see the variance of 17O excess from samples collected near the coast and further inland where it is drier. The research can give us information about our current climate, and further research will give us the ability to study past climates.

Oxygen has 3 isotopes 16O, 17O and 18O. During the hydrological cycle, there is a preference for certain isotopes based on their mass. When the ocean evaporates, or any body of water, the lighter isotopes evaporates more readily than the heavier isotope. During precipitation, the heavier isotope is preferentially removed. Previous work has been done using 2D excess, which is the heavier isotope of hydrogen, but it is limited in its uses. During the hydrological cycle, the same process occurs with 2D because the heavier isotope is rained out, and the lighter isotope is evaporated. But 2D is temperature dependent, and not all materials contain hydrogen. New technology has allowed further research using the lest abundant isotope 17O. The ability to measure the abundance of the least abundant isotope has opened the door to measuring beyond water samples. Since we will be looking at the oxygen isotopes, and not hydrogen, there is a greater advantage. 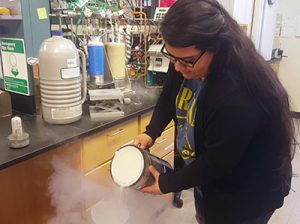 After the tap water samples are run through the prep line and introduced into the mass spectrometer, we will be able to see the abundance of each of the oxygen isotopes. Walking into a research lab was super intimidating, but within a week I was knocking out several samples a day. To start I transferred a small amount of water into a vile, and then I put them onto the prep line. The water went into the prep line, and ended up as O2 gas. The O2 gas was collected on a manifold, and then it was connected to the mass spectrometer. Then I used Matlab in order to analyze my data.

Through previous work it has been found that 17O excess increases as one moves further inland. And 18O should decrease as you move further inland, and this makes sense because it get drier. Although we did find that 18O does decrease in our samples, we did not find that 17O excess increases. Both seem to be influenced by some other factor, and this may be evaporation. The tap water samples collected come from ground water, reservoirs and rivers, so evaporation could be affecting the samples, since it is not in a controlled environment. In future work our focus should be on a specific body of still water, so we can see how the isotopes vary.

Everyone at JISAO believes you can do great things even when you are doubting yourself, and I did this for a few days because I became so overwhelmed. But through so much support from JISAO and my mentor, those feelings quickly subsided. I learned so much about geochemistry, and so much about myself! I want to thank everyone at JISAO, Casey and Andy in the Isolab! 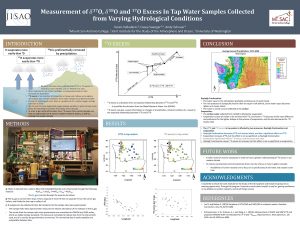