I attend the University of California, Irvine where I am studying Chemical Engineering. As a JISAO intern this summer, I had the opportunity to work with Dr. Meghan Cronin and Dr. Nick Bond at the NOAA: Pacific Marine Environmental Laboratory (PMEL) on a project that focused on the Ocean Weather Ship Papa, also known as OWS P, with its active dates spanning December 1949 to August 1981. With this project, I was tasked with finding and analyzing meteorological data that was gathered on this particular weather ship at its specified coordinates in the North East Pacific Ocean. The information of most interest were the precipitation rates since it was uncommon to take these measurements on weather ships. However, the OWS P crew had reportedly done this.

This project involved numerous dead ends since searching for archived data is not as straight forward as it may seem. Through these dead ends, I was able to really develop my problem solving and critical thinking skills. After a few weeks of heavy searching which included reaching out to a number of people for advice and/or direction, I was able to come across two promising data sets, the International Comprehensive Ocean-Atmosphere Data Set (ICOADS) and the University of Washington Applied Physics Laboratory (APL). Unfortunately, no rain accumulation data was recorded, but alternate data was available that would allow me to translate measurements into actual rain accumulations. This alternate data was present weather codes. These codes ranged from 0-99 and an example of one of the most popular codes taken on OWS P was code 63 which means ‘rain, not freezing, continuous, moderate at time of observation.’

From these recorded codes, I was able to generate a graph of OWS P data along with the Papa buoy rain accumulation data that has been recorded from 2007-2018. After visually comparing the two, there is a slight increase in rain fall for the 2007-2018 timeseries compared to the 1949-1981 timeseries. This trend is consistent with a decrease in salinity that has been reported at the same coordinates as OWS P. With a decrease in salinity and increase in rainfall, this implies that the freshening of the top layer of the ocean is occurring.

Overall, I learned a lot of transferrable research skills from this internship and I am very grateful to JISAO for allowing me the opportunity to expand my scope of knowledge. I feel significantly more confident in my problem solving and critical thinking skills with respect to research and I attribute this to my mentors, PMEL, and JISAO. 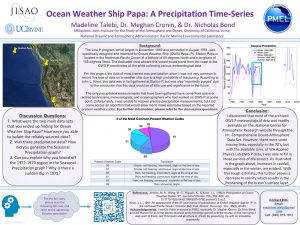