Alaska is home to some of the largest salmon runs in the world, and because of the economical, ecological, and cultural significance of salmon, the fishery industry and the state of Alaska work to ensure sustainable harvests every year. Lake Iliamna, the second largest lake in the U.S. and largest lake in Alaska, is home and spawning ground to many salmon species, and so the streams and tributaries in this area are closely monitored and surveyed often to assess the salmon population.

Streams in close proximity to one-another can vary greatly in physical and chemical conditions. Contributing factors include gradient (the slope of the stream), temperature, dissolved oxygen, conductivity, and nutrients levels (such as total phosphorous and total nitrogen) to name a few. In addition to the data already being collected in Lake Iliamna, the sampling of benthic macroinvertebrate (BMI) communities and accompanying water samples can serve to augment the current understanding of the intricate relationship between salmon and their spawning communities. Although studies using BMI sampling have been conducted in parts of Alaska’s, such as Denali State Park, it has yet to be done in the tributaries of Lake Iliamna.

BMIs have a long history of serving as bio-indicators of stream water qualities dating back to the early 1900’s. BMI sampling has gained popularity in ecological studies due to BMI availability (found in almost all continents), sampling ease (all that’s needed is a fine mesh net), sensitivity to changing stream conditions (sedimentation, habitat loss chemical pollution), function as the main food source for fish, and are much less expensive to analyze than water samples (which use expensive equipment and trained technicians). Thus, the presence or absence of a certain taxa can be indicative of certain physical and chemical conditions present in streams.

The overall aim of this study is to find and describe relationships between BMI communities and physico-chemical conditions present in the streams of northeastern Lake Iliamna, such as:

Eleven streams were sampled over the course of four weeks. Stream water samples were filtered using 0.45-micron filters, stored on ice, and frozen as soon as possible.  BMI samples were collected by agitating a half-meter stretch of stream bottom, dislodging BMIs, and placing a d-net directly downstream of the disturbance to collect the drifting BMIs. The BMIs were then preserved in ethanol and later identified to their taxonomic order, and if possible to their family, under a lab microscope.

The proportions of BMI taxas were calculated for each site sampled. Using these proportions, the diversity and evenness for each site was calculated using Simpson’s Index. The physical and chemical data of the streams gathered in 2014 was used in the preliminary analysis of the sampled communities. Statistical package, R, was used to create a linear model with gradient, temperature, and conductivity as predictor covariates. Principal component analysis (PCA) was also used to determine the similarities of BMI communities across streams.

Linear model results indicated that as temperature rose, evenness among sites decreased. Linear models also suggested that that as gradient increased, diversity as well as the percent abundance of ephemeropteras, plecopteras, trichopteras (EPT) decreased. Principal component analysis revealed that the greatest variability between BMI communities across streams was the percent abundance of EPTs and dipteras, with the second greatest variably between bivalves and aquatic worms.

Water samples were not analyzed due to lack of instrumentation at the Lake Iliamna camp. Stream samples will be analyzed at the University of Alaska Fairbanks, and the results will be sent to the Quinn research group. We eagerly await results in order to statistically analyze how the nutrient levels of nitrogen and phosphorus affect the BMI communities in the area. 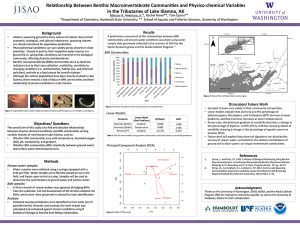