Hi! My name is Mark Yamane and I am studying marine science and computer science at Eckerd College in St. Petersburg, Florida. This summer, I had the pleasure of working with Mariona Claret and Pascale Lelong for a remote internship investigating near-inertial wave (NIW) interactions with cyclonic and anticyclonic eddies in the northwestern Mediterranean.

Eddies provide pathways that allow NIWs to radiate energy into the ocean interior, but the fate of NIW energy once it leaves the surface mixed layer is not well understood. It is known that cyclonic eddies repel NIWs while anticyclonic eddies trap energy at its base through “inertial chimneys”. The Mediterranean Sea can be considered a microcosm of the global ocean as it is a host of many similar dynamic features, such as deep-water mass formation, thermohaline circulation, NIWs, and eddy fields. Using model output simulating ocean circulation in the Gulf of Lion, my project focused on the differences in dynamical features and interactions between NIWs, cyclonic and anticyclonic eddies at the surface, 500m, and 1500m depths.

By analyzing various eddy statistics determined after applying the AMEDA eddy-tracking algorithm over the model output, we found that anticyclonic eddies propagated further than cyclonic eddies, and Rossby number (a measure of eddy intensity) for both types of eddies decreased by an order of magnitude at depth. Additionally, by analyzing rotary spectra over the open ocean and following eddy centers, NIWs were found propagating to depth, suggesting the facilitation of an inertial chimney mechanism. Results from this study provide insight into eddy fields in the Gulf of Lion and support the current understanding of interactions between eddies and NIWs.

While this research internship was conducted remotely due to COVID, I still learned many valuable research and professional skills from Mariona and Pascale through our weekly meetings, and from the CICOES community through our weekly virtual seminars. Also, because this internship required a lot of coding, I was able to put a QR code on my poster leading to my GitHub repo for this project! Despite not being in-person, the other interns and I were still able to hang out through virtual scavenger hunts and game nights throughout the internship as well. All in all, I had an amazing time! I am grateful that CICOES was able to switch to a remote format and still create a very meaningful internship. 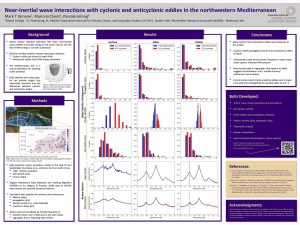