My name is Miranda Wittmond and I am a rising junior Environmental Science major at Santa Clara University in California. This summer, I worked at the US Geographical Survey lab with Dr. Dave Beauchamp and Dr. Lisa Wetzel through the JISAO program, studying how juvenile Chinook salmon allocate their internal energy stories before their first winter.

The period before their first winter, during which the juvenile Chinook prepare to move from Puget Sound to the Pacific Ocean, is considered to be a critical growth period. This is because prior research has shown that the more salmon grow during this period, the more likely they are to survive adulthood, with each gram gained adding significantly, statistically, to their long-term survival. As Chinook populations have been on the decline within the Puget Sound area, studying this period of the juvenile Chinook’s life cycle could provide insights into factors that might be limiting or promoting growth for the salmon. Measuring the energy density of young salmon during this critical growth period provides insight into how they allocate their internal energy budget in response to selective forces; for example, if they focus on somatic growth to minimize size-selective mortality, focus on lipid growth to minimize the possibility of overwinter starvation, or if they balance some trade-off between the two, splitting resources or switching between them throughout the season.

To measure the energy density of the salmon, I used bomb calorimetry, which is a machine that explodes samples to measure how much energy said samples give off. These samples were collected from all over Puget Sound, from the time of marine entry through the critical growth period, as the juvenile Chinook moved from estuarine deltas, nearshore, and offshore habitats within Puget Sound. Then they were measured, weighted, and dried, before each individual fish was ground up into a homogenized mixture that could be packed into pellets to use inside the bomb. 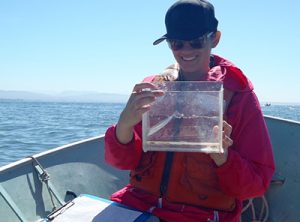 After bombing 99 samples from March to October, we found that the energy density of juvenile Chinook remain rather consistent throughout the sampled months, implying a focus on somatic growth to avoid size-selective mortality, with a sudden switch to lipid development later in the fall season. It also shows that the environmental differences between the rivers are not major factors causing energy density variation within the salmon population. Furthermore, the wet energy density rising with % dry weight shows that, because lipids proportionally displace water in fish tissues, we can use % dry weight as an economical proxy for energy density in the future, cutting costs and time by using a model instead of catching and sampling fish. In the future, there are plans to repeat the tests with juvenile crab larvae, the main food source of juvenile Chinook, to see how much energy content they have throughout the critical growth period of the salmon and if their energy density changes at all throughout summer and fall.

In addition to all of this, I also had the opportunity to help out with other projects happening in the lab throughout my internship, and even go out to field to catch and measure fish. Most notable of these opportunities is a day excursion out to the Marrowstone lab, where I conducted feeding trials with Chinook to test if prey density affects their eating habits, and otolith extraction at the USGS lab where I dissected surf smelt and herring so their otoliths could be measured and used to determine each fish’s’ age.

My internship up in Seattle was amazing, and the experiences I had during it are not ones I will forget soon. Working at the USGS lab was fantastic, and all the people working there were welcoming and kind, making sure I was learning and working hard but still having fun. I am grateful for all they’ve taught and helped me this summer, and will never forget all the amazing experiences I had at the lab. I feel tremendously lucky to have been accepted to JISAO and been able to work with the program, and know that through it I have learned more about myself and what I want to do with myself in the future more than I would have with any other program. This summer has been unforgettable, and I will be forever thankful to JISAO for allowing me these experiences and memories. 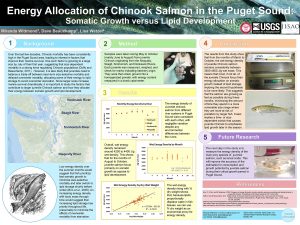