My name is Nicola Paul and I’m a junior at the University of Miami majoring in Marine Science/Biology and minoring in Chemistry and Climate Science and Policy.  When I was given the opportunity to participate in JISAO’s summer internship at the University of Washington, I hoped to confirm my interest in pursuing research in the marine sciences as a possible career.

As a JISAO intern, I worked in Dr. Dave Beauchamp’s lab at University of Washington’s School of Aquatic and Fisheries Science where I helped with their research on the threatened population of Chinook salmon in Puget Sound.

The Chinook salmon population in Puget Sound is currently listed as threatened under the US Endangered Species Act and has been declining for several decades.  The project in the Beauchamp lab that I worked on looked at marine mortality of juvenile Chinook salmon in several watersheds of Puget Sound, and more specifically size-selective mortality in July.  In order to understand size-selective mortality of Chinook, understanding the composition of their diets during certain times of the year is necessary.  As part of that research, I spent the first half of my internship identifying several prey items in juvenile Chinook salmon samples collected in 2015 via purse seine and weighing those prey items via blotted wet weight.  For the second half of my internship, I worked to analyze the 2015 data as well as some of data from 2014 using the computer programming language R.  For my project, I focused on the effect of 2015’s extremely high temperatures on the diet composition of juvenile Chinook salmon in Puget Sound.

Working in the Beauchamp lab also allowed me to help collect samples on a purse seiner as well as through gillnetting which I had never done before.  Throughout my nine weeks interning in Seattle, I felt as though I was able to experience several aspects of what a career in research would entail—from field work, to lab work, to analyzing data, to presenting the results of my research.  This experience has only confirmed my interest in pursuing a career in research and increased my interest in marine and climate science.  During the summer I was also able to explore the city as well as other parts of Washington like Mount Rainier and Olympic National Park, but the best part about the summer was making lifelong friends with the other JISAO interns. 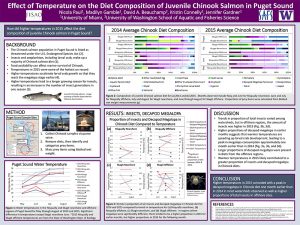