My name is Peter Sumner, and I’m a student of geology at Fort Lewis College in Durango, CO. I was given the opportunity in the summer of 2017 to join JISAO for a nine-week internship in environmental science and computer science in Seattle, WA.

At the beginning of my internship, I was assigned to work under Dr. Bart Nijssen in the Computational Hydrology lab at UW. Dr. Nijssen was interested in utilizing Google Earth Engine to interpret the lab’s data in a new way. Earth Engine is an example of GIS, or Geographic Information System software, which is used to display data with built in coordinates on a digital map and analyze these data in a spatial context. Earth Engine is unique in that it is an online tool which uses Google’s servers to process huge amounts of data relatively quickly, making operations that would be impossible in most GIS software a simple task.

At the Computational Hydrology lab, the Variable Infiltration Capacity (VIC) climate model is frequently being used to generate climate information based on a set of inputs including wind speed, precipitation, and temperature. The model then outputs secondary effects such as the amount of snow on the surface and amount of moisture in the soil. These datasets can be very large. For example, a 40-year daily series for soil moisture would contain over 14,000 separate images. With over 14,000 images to sort through each time an inquiry is made, even simple operations can take an unreasonable amount of time using most GIS software. Situations like this are where a tool like Google Earth Engine excels.

My work began as an attempt to simply get this data uploaded in a form that was compatible with Earth Engine, which alone took almost 2 weeks of troubleshooting. During this period, there was a lot of waiting for uploads, so I spent the downtime familiarizing myself with the software. After that was done, my goal was to figure out the best way to work with the data and develop applications to speed up analysis with a user interface. All of the work I did was in Javascript.

To give an example of how this tool could be used with user-uploaded data, I took on a somewhat simple project determining the risk of landslide damage to various communities based on soil moisture data from the VIC model. The soil moisture data was compared against data provided by Google for slope steepness and vegetation cover to make a general landslide potential map. This was then compared against a trend of urbanization throughout the Pacific Northwest to determine areas in which new development is encroaching upon zones of high landslide potential. The final result is influenced by both regional environmental trends and population density. 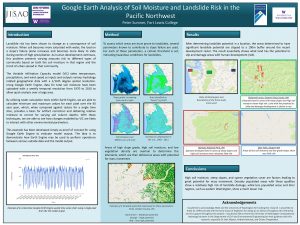