During the first hours of my internship, my mentor John Horne arranged a week-long trip to Florida for us to test our “acoustic brain.” I wasn’t even sure what an acoustic brain was at the time (it’s a collection of python scripts on a tiny but powerful computer that summarizes acoustic data and sends it back to shore in almost real-time), but I was like oh wow this is real. Since then, my summer has been action-packed array of coding, exploring Seattle, debugging, learning about echo sounders and fishery acoustics, much googling, a bit more coding, testing the acoustic brain myself and many other scientists (my mentor, researchers from NOAA, the University of Southern Florida, National Geographic with really cool drift cameras, and the boat’s crew) have worked on by going on a cruise to Florida, and documenting the code I’ve written.

I learned a lot this summer. I learned some python. I learned baud rates for ASL’s AZFP and Simrad WBTMini echo sounder, along with more general serial communication protocols. I learned what it’s like to be seasick (I don’t recommend it). I learned that Fishery Acoustics is a whole branch of science, and then I learned the basics of fishery acoustics (send sound -> hear echoes -> detect fish). Also, I was part of the team that successfully sent an autonomous underwater glider into the ocean which gathered acoustic data with an echo sounder, processed and summarized the acoustic data into ‘echometrics,’ and sent that data home. This is huge in the fishery acoustic world, and means that scientists can work with data from their gliders without having to wait months to retrieve their gliders (which may have gotten lost or leaked or something). And this has never been done before. Wow.

Most importantly, I learned what science and research are like at a big school like the University of Washington. I learned that it takes a full-time commitment and investment in your work, and without that, it’s really hard and lonely. Thanks JISAO for bringing me out to the Pacific Northwest, where I had a ton of fun exploring Seattle and learned a lot (see above). 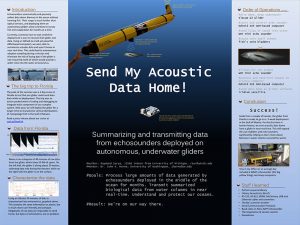