The Jaffe Group is exploring how wildfires and the subsequent transport of smoke influences local and regional air pollution in the Pacific Northwest (PNW). More specifically, wildfires produce significant quantities of nitrogen oxides and volatile organic compounds, critical reactants for the production of tropospheric ozone and a nitrogen species called peroxyacetyl nitrate (PAN). Roughly 40% of the initial nitrogen oxide emissions from wildfires are converted to PAN in the first few hours after emission. There are two primary reasons why PAN is of particular interest. First, PAN is a toxic pollutant. Second, and perhaps more importantly, PAN is relatively stable in the high troposphere and can subsequently travel large distances. PAN eventually undergoes thermal decomposition, releasing reactive radicals and nitrogen oxides which together may produce ozone far downwind of a source fire. Ozone within the troposphere, the atmospheric layer where most weather occurs and that humans inhabit, is a pollutant and poses a risk to human health. If inhaled, ozone can severely damage lung tissue.

However, not every wildfire produces ozone. This is presumed to be the result of a complex series of factors influencing the transport of PAN. Understanding the complex processes that promote ozone production in certain smoke plumes is therefore an important consideration for monitoring regional air quality.

Since there is a myriad of potential factors that influence PAN mixing ratios in smoke plumes, we chose to focus on temperature and smoke plume lofting height in the troposphere. Based on laboratory observations, we expected the rate of PAN decomposition to remain low if temperatures were not great enough. Smoke plumes lofted to greater heights in the troposphere, say 3000 meters above sea level, would also have a greater mixing ratio of PAN (due to cooler temperatures at greater heights) than plumes that travel at lower heights in the troposphere. As a result, PAN in smoke plumes traveling at cooler temperatures would travel farther downwind of the source fire before decomposing and places far from a wildfire would experience elevated ozone levels.

To explore these relationships, I was tasked with taking data collected from a period between 2013 and 2016 and running NOAA’s HYSPLIT model to determine the approximate height smoke plumes were lofted in the troposphere and the correlative temperature. With this information, we hoped to get a clearer picture of the how such factors influence the mixing ratios of PAN.

Unfortunately, our selected preferences and parameters for the HYSPLIT model were rather unsuccessful at producing a truly valuable result. The transport temperature and height did not correlate with PAN enhancement ratios. However, we did not consider all factors that influence PAN levels in smoke plumes. For example, PAN mixing ratios are also a function of the fuels available to a wild fire, how it’s burning, and the time of day a plume is lofted. What can be concluded is temperature and loft height alone are not adequate for describing PAN levels in a smoke plume. My analysis was able to demonstrate that using HYSPLIT to run a backwards and forwards trajectory on a smoke plume is a useful method for pinpointing its origin.

I’ve learned some important lessons about research and more generally, science. Research doesn’t always go as planned. This happens, and you can only use mistakes as reason to return to the drawing board and revisit your methods. While this may sound cliché, these experiences ultimately will inform future decisions that may produce significant contributions.

Of course, I want to thank Dr. Dan Jaffe and Crystal McClure whose inexhaustible patience and guidance for a clueless undergraduate provided invaluable learning opportunities. To Dan, I also want to express my thanks for the outdoor excursions into the beautiful Cascade Mountains. What a way to experience a place! I also want to thank Dr. Tom Ackerman, Jed Thompson, Collen Marquist, and anyone else at JISAO I have forgotten for making this all possible. To all, I am incredibly grateful. 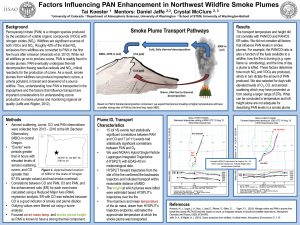