This summer I had the opportunity to work with Dr. Sabine Mecking and Dr. Kyla Drushka on a project studying Argo floats with an interest in Oxygen.

Oxygen is a great tool for Oceanographers to use to analyze changes in the ocean; whether these be due to natural cycles, climate change, and so forth. This is due to Oxygen’s great sensitivity to changes in temperature, currents, and respiration. The typical way oceanographers take samples of Oxygen is by sampling off of research vessels. However, this method limits the locations that oxygen can be sampled from. The new method in question however for sampling Oxygen, is by taking measurements from Argo floats. Argo floats historically have been deployed by the thousands into the ocean throughout the world to take measurements in salinity, temperature, etc., but only recently have been fitted to take Oxygen  measurements. This summer, we selected specific floats in the North Pacific to analyze the ability of Argo to record Oxygen data, as well as it’s limitations.

Overall, Argo looks to be a very promising method of observing Oxygen changes in the ocean on a larger level. I’m excited to see the development of this method to better our understanding of oxygen in the ocean, as well as being able to survey a greater area than we have before. 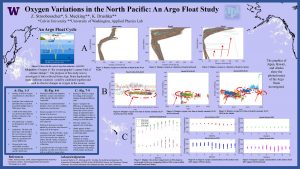